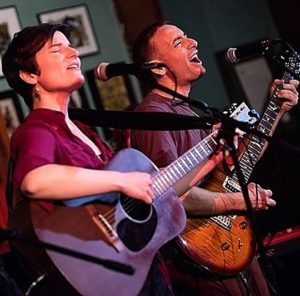 Eleanor and Elie met at music school in London.  At the time, Eleanor was a singer-songwriter seeking to collaborate, and Elie had a reputation of being one of the institution’s most gifted musicians.  Overtime they found freedom in creating a duo, working together to blossom Eleanor’s song seedlings with a full range of harmonic, instrumental, and arrangement possibilities.

“Invisible Forces”,the fourth recording by the fiercely independent twosome, was the #1 album on the International Folk DJ charts in September 2018, with four songs in the top 20. Americana UK described it as “a musically diverse take on classic Midwest Americana, sung with the soul of the gospel” and Big Takeover Magazine called it “a socially potent commentary of humankind’s modern times.”