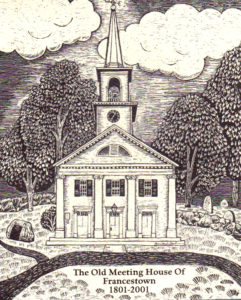 The Old Meeting House is one of the oldest and most prominent buildings in our New Hampshire Historic Landmark Village. It reflects the history and development of the Monadnock region, New England, and America.

In the early 1700s, before Francestown was even incorporated, the townsfolk chose a prominent site to build their meeting house. In 1775, twelve pounds were pledged at a town meeting, and a rough frame was raised on June 8th. But the hardship and poverty caused by the Revolutionary War temporarily halted construction.

In 1787 the town voted to sell pews in order to finish building the meeting house. Eight years later, the town proposed an article to enlarge the structure – only to be voted down.

At last, in 1800, the town voted to build a new meeting house measuring 66 x 48 feet. Current pew holders were given the option of either receiving a full refund of the cost of their old pews or credit toward a new pew. All of the pews were sold before the first board was laid.

Groundbreaking began in 1801, and the Meeting House’s construction was completed in 1803 for a total cost of $5,274.24. Francestown now had a grand symbol of its commitment to community, church, and government. In 1808, the townsfolk purchased a bell lifted it into place, where it hung for almost 50 years. 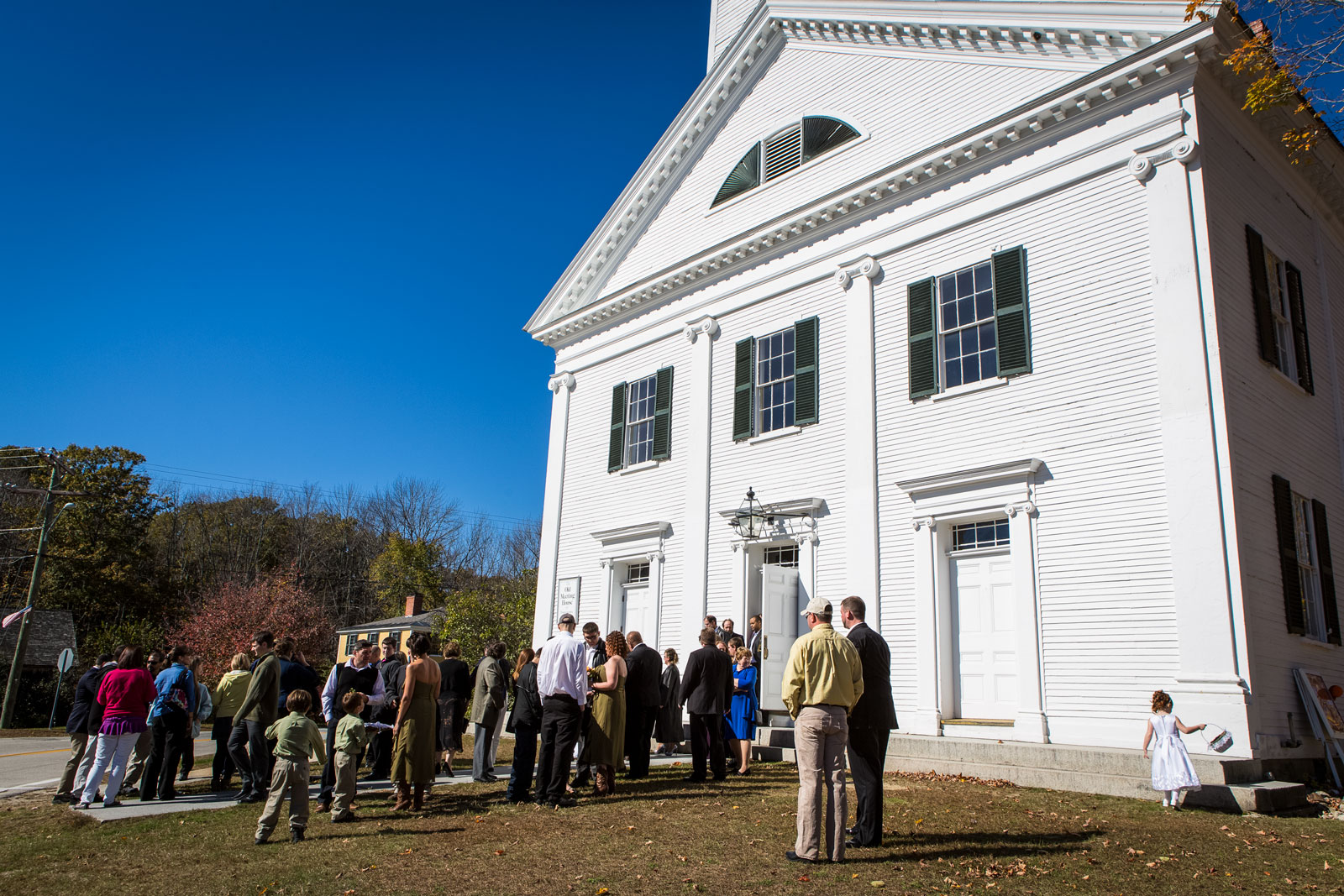 It took 30 to 40 men to raise the original structure in 1801. Since then, generations have contributed their labor, skill, and dollars to renovating this historic building.

1835 saw a major restoration, expanding the building and modernizing it in the Greek Revival style for $10,001.22. A new front and steeple were added in 1837, and the building was turned to face the crossroads at the village’s center.

Ringing in the New Year in 1854, the 46-year-old bell cracked. Although townspeople wanted a larger, heavier bell, the tower was too decayed to support the improvement. So they constructed a new spire — with a new and improved bell hoisted into place in 1855.

As the town’s timepiece, the clock has also required repair. In 1911, some alumni from Francestown Academy (now the Town Hall) raised $155, with the town voting to pay the additional $165 for purchase of the impressive clock from E. Howard and Co. of Boston that remains today. Another handsome clock, donated to the Old Meeting House by the “Sons of Francestown, Residents of Manchester” in 1835, now graces the second story gallery.

The interior of the building was extensively renovated in 1953, when Neil Leonard (a summer resident from Boston) began overseeing extensive renovations including a new pulpit, organ screen, and heating system, along with carpet, draperies, and pew cushions. Portions of the large vestibule became a ladies’ parlor and minister’s study. The Cogswell Benefit Trust of Manchester made the largest single contribution to this renovation. 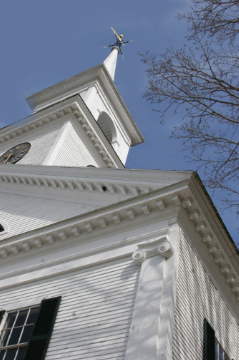 In 1987, the title was transferred to the Old Meeting House of Francestown, Inc., a non-profit corporation responsible for the ongoing preservation, restoration, maintenance, and management of the building to retain its historical and architectural integrity, as well as its continuing usefulness to the town.

The Old Meeting House of Francestown was placed on the National Register of Historic Places in 1999.

Most recently, the exterior of the Meeting House was completely scraped and repainted in 2017/18. 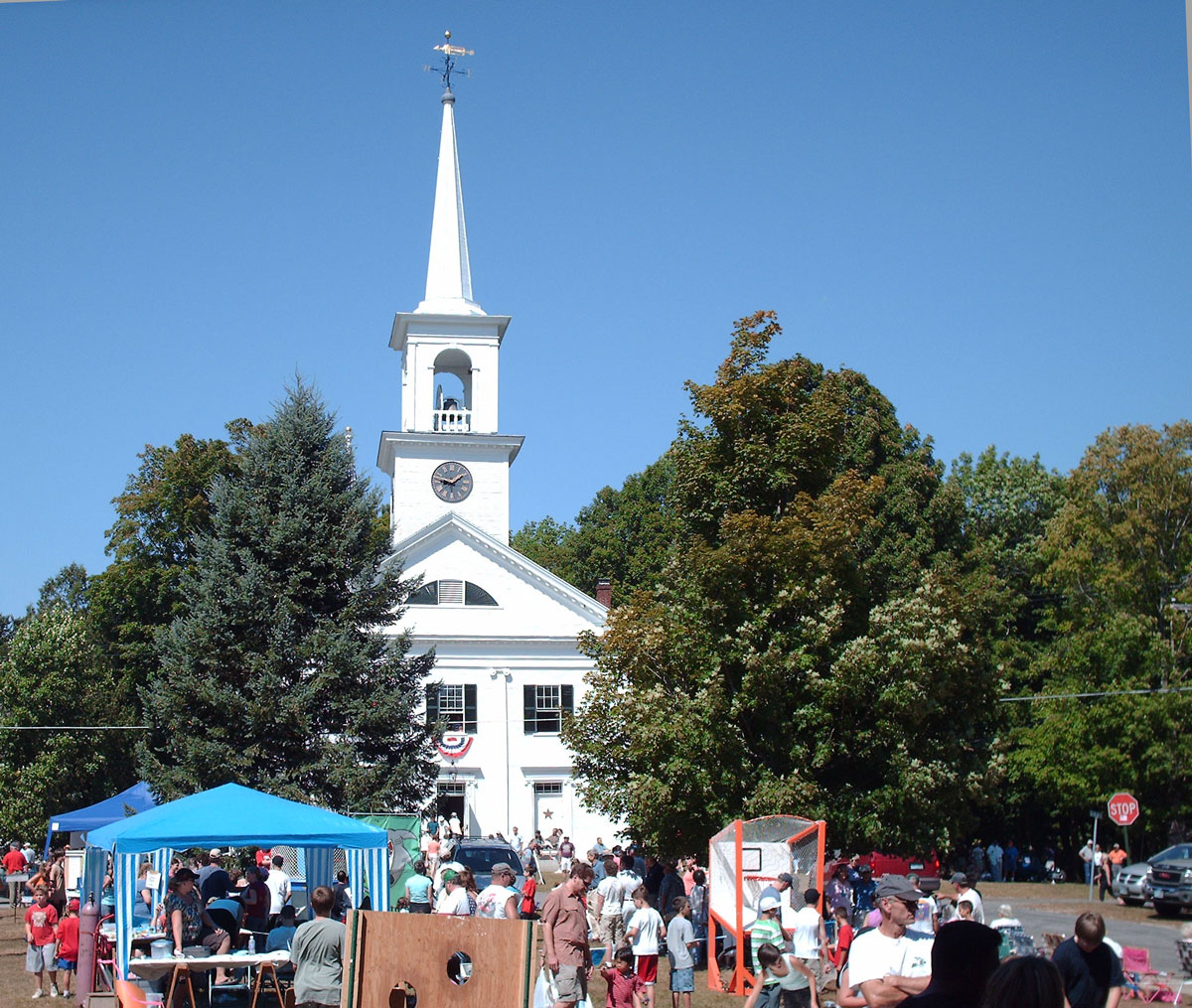 Today, the “architecturally magnificent building” remains an important part of our New Hampshire Historic Landmark Village. The Old Meeting House continues to serve as a hub for community events, picturesque weddings, and private gatherings. Thanks to the generosity of our donors and the dedication of our board of trustees, our cherished building will continue to be the heart of Francestown for generations to come.

The Old Meeting House of Francestown is a member of the New Hampshire Preservation Alliance, a non-profit organization that helps community leaders and property owners save and revitalize their irreplaceable landmarks. Our membership grants us access to various workshops, events, and expert consultation that enables us to preserve our building’s beauty without compromising its functionality.

The Old Meeting House is listed in the New Hampshire Film Office locations directory and is available for a wide range of commercial and private cinematography. From motion pictures and television shows to commercials and still photography, the Old Meeting House is ready for a starring role in any production, large or small. For more information, contact matthew.newton@livefree.nh.gov