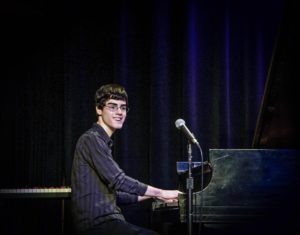 Matt Savage is a 28 year old accomplished jazz pianist and composer who grew up in Francestown, NH. Diagnosed as a prodigious savant at an early age, Matt taught himself to read music as a child. He has played with some of the biggest names in jazz since first labeled a “jazz prodigy” at age 8 – the same year he met and played piano for Dave Brubeck.

Matt has had an 18-year professional career as a jazz musician, leader and composer with ensembles of different size including his own Matt Savage Trio. He has played with some of the biggest names in jazz, including Chick Corea, the Ellington All Stars, Chaka Khan, Wynton Marsalis, Bobby Watson, Clark Terry, Jimmy Heath, Jason Moran, Arturo O’Farrill, John Pizzarelli, Joshua Redman, Terri Lyne Carrington, Jon Faddis, Jerry Bergonzi and Donny McCaslin among others. He has been a guest of numerous television and radio programs such as the Late Show with David Letterman, Late Night with Conan O’Brien, The Today Show, and All Things Considered.

Along the way, he has recorded thirteen albums as leader and one as collaborator. He is a Bösendorfer piano artist.

For more info go to: